I just found this great picture showing the Edges and Corners of a Square Sail.

In nautical usage the “sheet” is applied to a rope or chain attached to the lower corners of a sail for the purpose of extension or change of direction.

The galeas Albanus with four staysails as headsails, or jibs: (left to right) flying jib, outer and inner jib and “the” staysail

A headsail is any sail forward of the foremost mast on a sailboat.[

Schematic view of the bow of a ship, showing: A the martingale stay, B the dolphin striker and C the bobstay.

A dolphin striker (an older term for a martingale boom or simply a martingale; sometimes called a striker) is a small vertical or near vertical ancillary spar spanning between the bowsprit and martingale thereby redirecting the tension in the forward end of the martingale slightly more vertically. This vertical component is necessary to more effectively oppose the forestays’ mostly upward tension on the forward end of the bowsprit than would be the case in the absence of the dolphin striker. 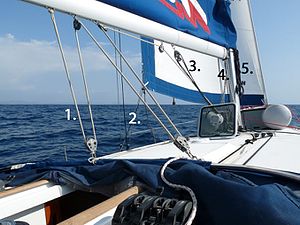 Running rigging on a sailing yacht:

Ratlines, pronounced “rattlin’s”, are lengths of thin line tied between the shrouds of a sailing ship to form a ladder. Found on all square-rigged ships, whose crews must go aloft to stow the square sails, they also appear on larger fore-and-aft rigged vessels to aid in repairs aloft or conduct a lookout from above.

Lower courses in a ratline are often made of slats of wood (battens) for support where the distance between shrouds is greatest. These wooden boards are called rat-boards. In some instances, holes in these slats guide and organize low-tension lines between the deck and the rig.

Modern tourists turn a capstan. Sailors would coordinate the rhythm of their movements by singing a particular type of sea shanty as they walked around the capstan. The tensioned portion of the rope would hoist a foresail and could also be used to lift a heavy spar into position on the mast or to transfer cargo to or from a dock or lighter.

A capstan is a vertical-axled rotating machine developed for use on sailing ships to multiply the pulling force of seamen when hauling ropes, cables, and hawsers. The principle is similar to that of the windlass, which has a horizontal axle. 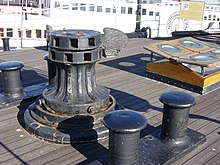 A capstan on a sailing ship. The upper portion is operating the anchor windlass below in the Forecastle 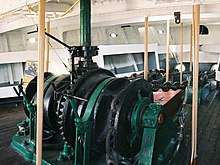 Below the capstan shown above is the anchor windlass

In its earliest form, the capstan consisted of a timber mounted vertically through a vessel’s structure which was free to rotate. Levers, known as bars, were inserted through holes at the top of the timber and used to turn the capstan. A rope wrapped several turns around the drum was thus hauled upon. A rudimentary ratchet was provided to hold the tension. The ropes were always wound in a clockwise direction.

Capstans evolved to consist of a wooden drum or barrel mounted on an iron axle. Two barrels on a common axle were used frequently to allow men on two decks to apply force to the bars. Later capstans were made entirely of iron, with gearing in the head providing a mechanical advantage when the bars were pushed counterclockwise. One form of capstan was connected by a shaft and gears to an anchor windlass on the deck below. On riverine vessels, the capstan was sometimes cranked by steam power.

A yard is a spar on a mast from which sails are set. It may be constructed of timber or steel or from more modern materials like aluminium or carbon fibre. Although some types of fore and aft rigs have yards, the term is usually used to describe the horizontal spars used on square rigged sails.[1] In addition, for some decades after square sails were generally dispensed with, some yards were retained for deploying wireless (radio) aerials and signal flags.

Parts of the yard

A view of Stavros S Niarchos‘s main-topgallant yard shortly after maintenance, clearly showing its various parts. On relatively “modern” late-nineteenth-century rigs like this, the quarters make up almost all of it. Click the picture for more details. Bunt The short section of the yard between the slings that attach it to the mast. Quarters The port and starboard quarters form the bulk of the yard, extending from the slings to the fittings for the lifts and braces. Yardarms The outermost tips of the yard: outboard from the attachments for the lifts.

Note that these terms refer to stretches of the same spar, not to separate component parts.

The yards are mounted on the mast in such a fashion as to allow free movement under the control of lifts and braces. The sail on this yard is “in its gear” – it is hanging below the yard but still folded up rather than spread to the wind.

Gunwale of the Cutty Sark

The gunwale (pronounced gunnel) is the top edge of the hull of a ship or boat.

Originally the structure was the “gun wale” on a sailing warship, a horizontal reinforcing band added at and above the level of a gun deck to offset the stresses created by firing artillery.

Over time it remained as a valuable stiffener mounted inboard of the sheer strake on commercial and recreational craft. In modern boats, it is the top edge of the hull where there is usually some form of stiffening, often in the form of traditional wooden boat construction members called the “inwale” and “outwale”.

On a canoe, the gunwale is typically the widened edge at the top of its hull, reinforced with wood, plastic or aluminum, to carry the thwarts.

On a narrowboat or canal boat, the gunwale is synonymous with the side deck – a narrow ledge running the full length of the craft.

A fife rail is a design element of a European-style sailing ship used to belay the ship’s halyards at the base of a mast. When surrounding a mast, a fife rail is sometimes referred to specifically by the name of the mast with which it is associated: the main fife rail surrounds the main mast; the mizzen fife rail surrounds the mizzen mast, etc. It is one of a dozen or so types of “rails” often found on such ships. Fife rails are typically horizontal strips of either wood or iron and are joined and fitted to the tops of a series of stanchions. The term apparently derives from the location where the ship’s fifer would sit and play his fife at heaving of the ship’s anchor.[2]

Locations of fife rails on a 3-masted sailing ship.

A fife rail surrounding a ship’s mast will contain a series of belaying pins corresponding to the sails on that mast which they belay. A mast will either have a single horseshoe-shaped fife rail surround the base of the mast on the fore, starboard, and port sides, a single straight rail directly before or directly behind the mast, or a set of two fife rails, one on each side (fore and aft) of the mast.

Each sail associated with a given fife rail will have several corresponding belaying pins set into that rail.

Although a fife rail is a kind of pin rail, the term “pin rail” is often used to specifically denote those rails containing belaying pins that are attached to the hull. Unlike these, fife rails are freestanding.