I just realized something this morning that I have never given much thought to. As I build this ship, particularly now that I’m into the Riggings, I’m coming to learn more and more how a Sailing Ship works. My last Model was actually a Boat. And a Fore and Aft Rig at that. This Ship is my very first Square Rigger. I must confess that I had very little understanding about how these ships work until now. Which is one of the reasons that I began to build this model and modeling in general.

For me, it’s a pretty relaxing hobby, I must admit. Anyway, as I’m proceeding up the Main Mast, I’m starting to realize that these Sails were mainly controlled from the Deck. The men climbed them, of course, but mainly to secure the sails once they became fixed in the closed position. I imagine a lot of people simply assume that the men climbed up the riggings and out into the yards and were doing the pulling of the sails with their hands. Which simply wasn’t true. It just seems that way especially how they’re being portrayed in the movies. The sails are being pulled up or in by the Clewlines and Buntlines. Also, there are other lines which are used to lift the Yards up and down. Of course, there are stays which are used to control the angle of the sails. On my next build, the HMS Surprise, I’m going to pay more particular attention to that detail. Because these lines are supposed to come down to a particular position and Belaying Pin. Which makes sense if you think about it. That way the men would know exactly which line to un-secure and secure in order to control a particular sail.

Anyway, these are some of the things that occur to me while I build. 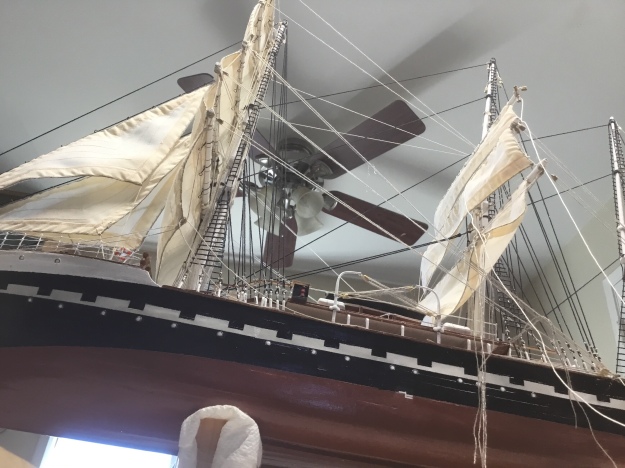 Just attaching all the Running Lines, Clewlines, Buntlines for the Main Upper TopSail.